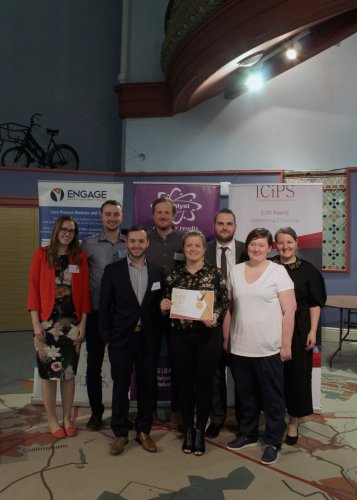 The ICiPS annual awards were made at a ceremony, held at Leeds Museum on 14th March.

The ICiPS annual awards were made at a ceremony, held at Leeds Museum on 14th March.
The education and collaboration categories were sponsored by Catalyst Consulting. The Collaboration award was won by Natural resource wales who partnered with other organisations to work cohesively to achieve common goals. Runners up were Warwickshire CC and PPL West London Clinical Commissioning Group with a Special commendation for Sellafield
The Education was won by the Scottish Leaders Improvement program, recognising the inspiration and knowledge they have delivered through their training and that has gone on to inspire hundreds of people. Runners up were the Environment Agency and National Grid with a Special commendation going to XPO Logistic Barnsley.
The Innovation category was sponsored by We are Lean and Agile and the winning organisations was Outside the Box; an inspiring charity from Scotland who provide support to citizens whose needs are not met elsewhere. Runners up were Environment Agency and Kent and Essex Police
Our new category was Citizen Improver; a category recognising members of the public who not only notice an opportunity to improve, but do something about it. The winner was Gill Phillips from Whose Shoes?.
The final category was the CEO award, given to organisations who demonstrate exemplary commitment to embedding CI in their culture. The very worthy winner was British Library.
Details of the 2019 awards will be on our web site shortly.