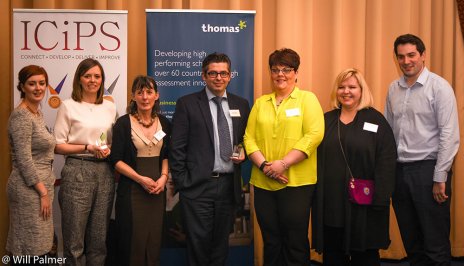 ICiPS 2017 award winners announced at a night of celebration

ICiPS 2017 award winners announced and presented at the Awards dinner held at York Racecourse. The following day was the annual conference.

The 2017 awards were made at an evening of celebration at York Racecourse. We had a record number of entries and the range and quality of work was inspirational,reflecting a step change in understanding about what CI is; entries predominantly about innovative work that resulted in culture change, collaboration between organisations and customer centered service design.The collaboration category was won by Sanguis and runners up were Orbis, West London Alliance and FSA. The Education category was won by HMRC and runners up were Glasgow City Council and Edinburgh Napier University. The Innovation category was won by Warwickshire County Council,Aneurin Bevan University Health Board, and Kent Police & Essex Police were runners up. The winner of the ICiPS CEO Special Award was West London Alliance. Entries will be available to download from our web site. Ordnance Survey, Catalyst Consulting and Thomas International sponsored the awards and we thank them for their contribution. A presentation was also made to Deborah Jennings from NHSBT who was awarded Fellowship of ICiPS having completed the University of Buckingham MSC in CI. The after dinner speakers was Olympian Derek Redmond and the Land Registry, the 2017 Special Award winners, talked about their work. The closing date for the 2018 awards will be 30 November 2017.
Our annual conference was held the following day. We welcomed 160 delegates and heard from an outstanding line up of speakers. Enact Solutions introduced some interactive sessions to help delegates reflect on collaboration; their end of conference poll showed that all delegates agreed or strongly agreed that the day was worthwhile.